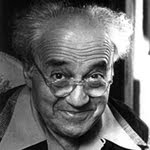 Ernest Bloch (July 24, 1880 - July 15, 1959) was born in Geneva, Switzerland. Shortly after he began to play the violin at age 9 he became interested in composing. Early-on he studied violin with Eugène Ysaÿe then composition with Iwan Knorr at the Hoch Conservatory. He also studied with the noted Swiss composer Émile Jaques-Dalcroze. From 1911 to 1915 he taught at the Geneva Conservatory. After moving about Europe he eventually settled in the United States in 1916 where he became an citizen in 1924. His music is known for its reflections of Jewish culture and liturgical themes. It remains an example of European post-Romantic traditions.

Bloch held several teaching appointments in the U.S., with George Antheil, Frederick Jacobi, Quincy Porter, Bernard Rogers, Virgil Thompson, and Roger Sessions among his pupils. In 1917 Bloch became the first teacher of composition at Mannes College The New School for Music, a post he held for three years. In December 1920 he was appointed the first Musical Director of the newly formed Cleveland Institute of Music, a post he held until 1925. Following this he was director of the San Francisco Conservatory of Music until 1930. (Source: WikiPedia and online sources)

Oregon Connection: In 1941, Bloch moved to the small coastal community of Agate Beach, Oregon and lived there the rest of his life. He taught summer courses at the University of California, Berkeley until 1952. He died in 1959 in Portland, Oregon, of cancer at the age of 78. His body was cremated and his ashes were scattered near his home in Agate Beach. The Bloch Memorial has been moved from near his house in Agate Beach to a more prominent location at the Newport Performing Arts Center in Newport, Oregon. (Source: WikiPedia) Documentary Video:Composer in Natures University.

This entry was compiled by Oregon ComposersWatch

Posted by Soundscape Explorations at 10:01 PM