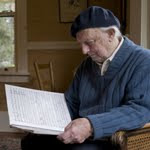 Jacob Avshalomov (March 28, 1919 - April 25, 2013) was born in Tsingtao, China to a Russian composer father, Aaron Avshalomov, and an American mother. He attended Reed College from 1939 to 1941. There, he studied conducting with Jacques Gershkovitch and played percussion and cello in the Junior Symphony, as the Youth Philharmonic was then called. He received a master's in 1943 from the Eastman School of Music in Rochester, N.Y. In 1943, he married Doris Felde, with whom he had two children. Both sons became professional musicians: David became a composer-conductor and Daniel, a violist in the American String Quartet.

During World War II, he served as an interpreter in the U.S. army. In 1946, he joined the music faculty at Columbia University. During his eight-year tenure, he founded and conducted the university chorus and occasionally conducted the orchestra. In 1954, he succeeded Gershkovitch as music director of the Portland Junior Symphony. He retired in 1995 and was succeeded by Huw Edwards.

Among the honors he received was the Ernest Bloch Award for his cantata "How Long O Lord" in 1948, and a Guggenheim Fellowship in 1951. His major choral work, "Tom O'Bedlam," won the New York Music Critics Circle Award. He received honorary doctorates from the University of Portland, Reed College and Linfield College." Source: David Stabler, The Oregonian (4-26-2013). See also: Jacob Avshalomov (WikiPedia)

Oregon Connection: Jacob Avshalomov was the second conductor of the nation's oldest youth orchestra, the Portland Youth Philharmonic (PYP). He served as its conductor for 41 years and over the course of his tenure worked with nearly 4,000 students. His work with Oregon's young people made the PYP a major cultural focus in Oregon's musical landscape.

Known as "Mr. A.", Avshalomov took the orchestra on six tours to Europe and Asia. He led the group to New York's Lincoln Center, the National Cathedral in Washington, D.C. and the Soleto Festival USA in Charleston, S.C.. Visiting composers Igor Stravinsky, Aaron Copland, and others were invited as guest conductors.

Related Video: On October 20th, 2008, Jacob Avshalomov visited the PYP for the first time after his retirement as its conductor. He tells about his young life in music and his work over the years with the orchestra. Click2View
This entry was compiled by Oregon ComposersWatch with the assistance of David Avshalomov.

Posted by Soundscape Explorations at 11:18 AM