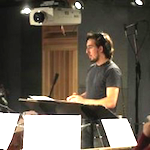 Jeffrey "Pumodi" Brice is a composer and sound designer for Video Games and Film as well as a teacher of Music Recording Technology at Portland Community College. He has been composing since 2007 in various capacities. In 2009, he attended New York Universities Tisch School of the Arts to study Film & TV production. While there, he worked on the score and sound design for over 40 films and a handful of games. Upon graduation, he got a job contracting with Ubisoft on the game Rocksmith, all while composing freelance. After the end of the contract, Jeff moved to Eugene to focus on freelancing.

Shortly after, Jeff moved to San Francisco where he worked as a workshop instructor and lab technician at the Academy of Art. In 2015, Jeff released "Harmonies of New Bloom" a downloadable soundtrack for the video game Dota 2. In Septermber, Jeff and his fiance moved up to Portland, where Jeff worked as an engineer at Digital One Post Production studio and freelanced. After returning from his honeymoon, Jeff began teaching music recording at Portland Community College. Jeff has embraced his teaching career all while continuing to compose as a freelancer.

He can often be found hanging out at the recording studio at PCC's Cascade campus, offering recording advice to students and working on his own music.

Oregon Connection: After I graduated from New York University in 2012, I moved to San Francisco to work on a contract with Ubisoft game studios. After that contract finished, I moved to Eugene. I spent a year there composing music for video games and short films while my wife finished college.

When she graduated, we moved to San Francisco for a few years, realized we missed Oregon too much, and moved to Portland. Since living here I've been teaching at Portland Community College on the Cascade Campus. As a faculty member in the Music & Sonic Arts department, I teach music recording technology and composition to students of all ages. My recording students also perform outreach to the community by offering recording services to community groups and local artists, in an effort to spur community engagement and strengthen the Portland music scene.

Posted by Soundscape Explorations at 10:08 PM