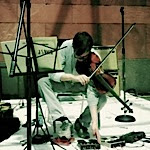 Jordan Isaiah Whitney Dykstra was born and raised in Sioux City, Iowa, educated in Southern California, and re-educated in the Pacific Northwest.

Oregon Connection: I moved from Los Angeles to Portland in 2007 to work for the label Marriage Records. I soon became involved in the improvisational and experimental music scenes, contributing often to live performance, score readings, arrangements, and recordings. In 2013 I moved just outside the city to focus on composition and my first proper record, "Audition".

Posted by Soundscape Explorations at 10:44 PM