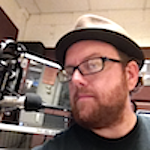 Matthew enjoys composing for electronics as well as for acoustic chamber ensembles, especially piano trio, wind quintet, and percussion ensemble, and has a special fondness for new combinations suggested by alliances of distinct musical and artistic personalities. He is presently working on a set of twelve-tone miniatures for alto sax and electric bass, his long-unfinished “Heroine” sonata for piano, a folio of horror-cabaret art songs for ukelele and processed voice, incidental music for PSU’s winter production of Euripides’ Bakkhai, and a concerto for percussion quartet with Javanese gamelan.


• so many selves, for soprano and piano
• Quintet for Winds (2nd Movement: Gloria) for woodwind quintet
• Fifty-Five Measures for Toby Strauss, for clarinet and marimba

Oregon Connection: As a child in Greater Los Angeles, Matthew dreamed of leaving behind all the smog and traffic and going “Somewhere That's Green.” He finally headed north in 2001, and has been in and out of Portland ever since.

Matthew has been involved with the Javanese gamelan at Lewis & Clark College; has composed, percussed, and recorded with some of Portland’s finest, weirdest progmetal, cyberpunk, and surf bands; has produced radio shows for KPSU; and has recently joined Cascadia Composers and commenced composition studies at Portland State University.

Posted by Soundscape Explorations at 10:47 AM