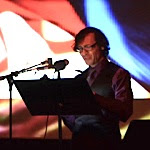 Chase's work has been performed and commissioned by Long Beach Opera, the California EAR Unit, New Zealand's 1 75 East, Philadelphia Classical Symphony, and Southwest Chamber Music among others. He's been a featured artist at the Janaçek Academie of Music in the Czech Republic, at Stanford University's CCRMA, and the 2008 Whitney Biennial to name a few.

The LA Times describes Chase's music as "…Rite of Spring meets Metallica!" and his whiplash-musical style has been showcased by Kalvos & Damien and Other Minds radios, featured on KMHT Television in New York, on Salve Television, Germany and has been noted by Strad and Double Bassist magazines, and American Record Guide to name a few.

Oregon Connection: Born and raised in Oregon. Returned to the state after living and working in Los Angeles, Germany, and New York. Currently resides in Eugene.

Posted by Soundscape Explorations at 10:22 PM