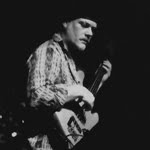 Rick Crittendan is a bassist and composer. As a performing musician, Rick has worked in the northwest region for over 40 years with some of the areas finest musicians as well as with his own quartet.

Currently, Rick’s compositions are featured in the repertoire of Art Lande’s Russian Dragon Band. He produced a section of music by John Cage for the Merce Cunningham Dance Company in New York. Two compositions have had their premier performances in Los Angeles as part of a West Coast Composers Forum. His “Five Variations for String Quartet” was selected by Cascadia Composers/NACUSA for inclusion in their 3rd Season.

Rick has also worked extensively in the studio on hundreds of recordings, including projects for Windham Hill and Narada Records, as well as releasing his own chamber-jazz CD, “Passages” with band mates Paul McCandless, Art Lande, and Chris Lee. The recording was produced by bassist, Glen Moore of the band Oregon.

Oregon Connection: I have been a working musician in Oregon for 45 years in the areas of performance, recording, and composing.

Posted by Soundscape Explorations at 10:40 AM