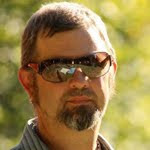 My undergraduate studies were at Hartt School of Music with James Sellars and Edward Diemente. I had the pleasure of working with many fine visiting musicians and composers and completed my degree in 1989. From 1985 - 1991 I was a front man and songwriter for the bands, The Geckos and The Love Drops recording two studio albums. From 1991 - 1996 I toured regionally in the Northeast as a singer-songwriter act, recording 3 albums of original songs. In 1997 I came to Oregon to study composition at the U of O Music school with Robert Kyr, David Crumb and Harold Owen. While there I co-founded the legendary composer-performer group, 100th Monkey Ensemble. After graduating in 2001, I focused on video art and sound design for several years. From 2004 - 2010 I produced the IMMI Fest, a festival of classic silent films presented with freely improvised scores. Trumpeter/composer Doug Detrich, guitarist Bill Marsh and I, as flutist, formed the Any Permutation Trio during that time. The trio played free improvisations utilizing acoustic and electronic instruments with effects and looping, often to accompany projected video art. Since 2010 I have been working on a project of story songs. I recently released a culminating 9 song CD, PODUNK: rural gothic story songs for the 21st century. Currently, I am writing chamber music that is born from abstracted treatments of fiddle tunes and English folk ballads.

Oregon Connection: I have been actively involved with the arts in Eugene since 2004 when I helped form the Media Arts Committee at the DIVA Center. From 2004 - 2010, I produced the IMMI Fest, a festival of classic silent films presented with freely improvised scores. My video art and sound design work have been heavily influenced by the West Eugene Wetlands, an expansive wetland preserve outside of Eugene.

Posted by Soundscape Explorations at 11:58 AM