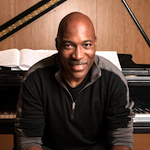 Darrell Grant is a creative artist who harnesses the power of music to create change. Whether through performing, composing, teaching, or organizing musical initiatives around community, sustainability or social justice, he seeks to leverage a deeper level of engagement and connection.


Since his 1988 appearance in vocalist Betty Carter's trio, pianist and composer Darrell Grant has built an international reputation performing with jazz luminaries Frank Morgan, Tony Williams, Roy Haynes, Brian Blade, and Esperanza Spalding. He has toured as a bandleader and solo artist in the U.S., Canada, Asia, and Europe. He has released seven critically-acclaimed albums as a leader, including Black Art--selected as one of 1994’s top ten jazz CD's by the New York Times.

In 2012, Grant was one of 12 composers awarded a Doris Duke Jazz New Works Grant by Chamber Music America. The resulting work "The Territory” premiered at Chamber Music Northwest and has been performed at The DiMenna Center in New York City, and the Portland Jazz Festival. Grant was inducted into the Jazz Society of Oregon Hall of Fame in 2009. In 2011, he was the first recipient of the Kamelia Massih Outstanding Faculty Prize in the Arts from Portland State University, where he is a Professor of Music and directs the Leroy Vinnegar Jazz Institute. He has been featured on National Public Radio and is a recipient of a 2015 Individual Artist Grant from the Regional Arts & Culture Council. More at www.darrellgrant.com.

Oregon Connection: I moved to Oregon in 1997 from NYC to take a position at Portland State University. Since then, I've found the cultural, natural, and historical climate of Oregon endlessly inspiring.

Posted by Soundscape Explorations at 10:52 AM