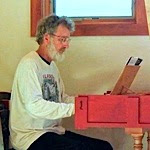 Born in Portland, Oregon, Leedy studied with Karl Kohn at Pomona College and at the University of California, Berkeley, where he was in a composition seminar with membership including La Monte Young and Terry Riley. An orchestral hornist, harpsichordist, and singer, he studied South Indian music in Madras with K. V. Narayanaswamy, North Indian vocal music with Pandit Pran Nath, and was first music director of the Portland Baroque Orchestra and the musical director of the 1985 Portland Handel Festival, during which he conducted complete, period-instrument performances of Handel's oratorios Jephtha and Theodora.

He taught music at UCLA, the Centro Simon Bolivar (Caracas), and at Reed College. He founded the electronic music studio at UCLA, and his synthesized music was among the earliest commissioned album-length recordings of the Moog Synthesizer and Buchla Synthesizer. The triple album Entropical Paradise was both the first triple album of synthesized "musical environments" — perhaps the first recording of explicitly ambient music — and featured modular analog synthesizer patches that, once set, played without further intervention by the performer. (Excerpts from Entropical Paradise were also included in the soundtrack album to the film Slaughterhouse Five as atmospheric complements to the music by Bach that had been featured in the actual Glenn Gould-produced soundtrack).

Although briefly composing in an atonal, but not strictly serial, style, Leedy's music has been predominantly melodic and modal. His music has included theatrical and spatial or environmental elements (Exhibition Music, Decay), has had deep relationships to early music (The Leaves be Green, Symphoniae Sacrae), and he has explored the relationship, in classical Greek and Latin between text and music. In general, his music exhibits a lyrical, melodic style, and connects, through its use of modality, repetition, and intonation, to the same radical reassessment of musical materials and musical history underlying the movement that came to be known as minimalism, led by his colleagues Young and Riley.

Following his studies in early western music and Indian music, and following the same musical path as his west coast American models, Harry Partch and Lou Harrison, Leedy made a decisive turn away from 12-tone equal temperament. He is a scholar of tuning systems and has composed for keyboard instruments in historical meantone temperament and in various systems of Just intonation. He has also proposed reconstructions of ancient Greek music, and has prepared, on historical-theoretic principles, settings for musical performance of Homer, Sappho, Pindar, and the Persai (The Persians) of Aeschylus.

Posted by Soundscape Explorations at 10:07 PM