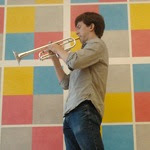 Jacobs Walls is an Oregon-based composer/trumpeter who writes music for orchestra, large ensemble, chamber groups, and voice. His music explores the intersections of chromaticism, lyricism, and angularity—often drawing on familiar musical elements, other times cutting against them. Walls is studying for a master’s in composition at the University of Oregon, where he studies with Robert Kyr and David Crumb. His recent commissions and publications include a sinfonietta for the University of Oregon Symphony Orchestra and a duo for trumpet and percussion available through qPress. Walls attended the 2011 Bang on a Can Festival as a trumpet fellow and the 2012 Brevard Festival as a composition fellow and conducting TA. Also active as a conductor, Walls has conducted groups in performances of Stravinsky, Andriessen, León, Murail and Sciarrino. He co-directs turnEnsemble New Music with fellow composer James Bean.

Oregon Connection: Having been born (1989) and raised in Forest Grove, Oregon, I am happy to be back in the state after a four-year stint studying at Williams College in Massachusetts. I'm now a third-year graduate student in music composition at the University Of Oregon where I study with David Crumb and Robert Kyr, composing music for chamber ensembles, orchestra, and voice.

Posted by Soundscape Explorations at 2:17 PM