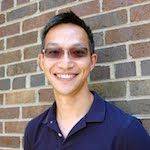 Jerry (Chiwei) Hui has written a wide variety of music that ranges from serious concert art music to humorous choral arrangements. His music has been performed in the United States, Germany, France, Scotland, Indonesia and Hong Kong by community choirs, campus ensembles, and professional groups. His composition has won prizes including the Robert Helps Prize 2008, and received commissions that will be featured in the World Saxophone Congress.

As a conductor, Dr. Hui has founded and directed various community choirs, church choirs, chamber ensembles and orchestras. He has performed often as a singer of early and contemporary music. He is active in performing for fellow composers, and has premiered over 30 new works. He is directing and performing with Eliza's Toyes, a vocal sextet specialized in early music. Recently he has joined the faculty of University of Wisconsin-Stout as the Director of Choral Activities.

Oregon Connection: Jerry Hui received his Masters degree in music composition and choral conducting from the University of Oregon where he studied with David Crumb, Robert Kyr, and Sharon Paul.
This profile created from online sources by OCW on August 21, 2015.

Posted by Soundscape Explorations at 12:16 PM