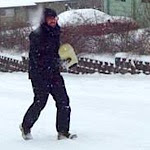 
Born in Mobile, Alabama, John is currently a master's student at the University of Oregon studying with Dr. Robert Kyr. He has previously studied composition and computer music with Dr. David Z. Durant, piano with Dr. Jerry Alan Bush, and conducting with Dr. Laura Moore. In addition to composing, John serves as the Assistant Director of the Eugene Contemporary Chamber Ensemble.

Oregon Connection: Although I am originally from Alabama, I now live in Eugene, Oregon and attend the University of Oregon as a graduate student. I have had the privilege of collaborating with musicians from both Eugene and Portland in my relatively short time here. I have found Oregon composers and musicians to be very dedicated and inspiring collaborators. Additionally, Oregon's beautiful landscape has greatly influenced my compositional output, providing a seemingly infinite wealth of creative stimulation.

Posted by Soundscape Explorations at 10:48 AM