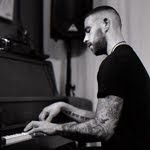 Josh Kreydatus is not only a self-trained pianist, but also a skilled and versatile composer. With a penchant for early Western classical music, Kreydatus has produced a vast body of work for the piano and orchestra. Most of his piano compositions are written and performed in 'free-time' meter, or rubato. Sixteen years of informal musical training has allowed Kreydatus to develop his own style of playing the piano that is both humanistic and marvelous to hear and watch, especially when performed live.

Josh's interest in music began with playing video games throughout his childhood. He learned how to read music and play the trumpet at age 11. As a freshman at Auburn High School he quit the trumpet and began to study the piano. After graduating high school, Josh began using audio recording software to record and produce his own music, most of which was heavily inspired by Symphonic Black Metal and Gothic music. It was during this time that Josh was composing and recording music that had a certain cinematic, soundtrack quality to it. His family, friends, and even strangers encouraged the young Kreydatus to compose music for movies and video games.

Kreydatus was born in Auburn, New York. As an Auburn High School student he discovered his passion for music composition in 9th grade, while performing as a piano accompanist under the mentorship of choir director, Stephen Stomps. At age 22 Kreydatus moved away from home to live and work in Boston for the next 9 years. The first three years he spent in Boston was a time of immense creativity and self-development, and is where he composed 'PIANOLOGY' and 'Final Judgment', among dozens of other works. In January 2010 he relocated to San Francisco and began his college studies that same year at the City College of San Francisco (CCSF). It was also in 2010 when Josh answered to an opportunity to compose some music to an online video came called Social Star, developed by Google Inc.

Kreydatus is actively pursuing a career as a video game music composer. He is most interested in future game titles that not only match his stylistic preferences, but also projects that need music in a genre he truly loves - Role Playing Games.

Oregon Connection: Josh lives in Portland and is working toward a Bachelors of Music in Composition at Portland State University, 2016.

Posted by Soundscape Explorations at 2:35 PM