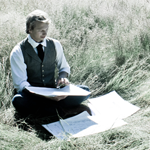 Justin Ralls is a composer, conductor, and writer, hails from the Pacific Northwest, migrating from San Francisco to Portland, and is inspired by wildness and the elemental forms of creativity. His music is varied and eclectic including a work for orchestra inspired by John Muir, a solo flute piece inspired by natural soundscapes and birdsong, and a recent film score to the 1983 Turkish remake of Rambo: ˜Turkish Rambo."™

Ralls was recently reviewed in Oregon Arts Watch as “a composer of high ambition and promise.” The SF Examiner remarked of Ralls’ recent orchestral work, Tree Ride, as “a whirlwind of thick orchestral textures…definitely establishing his own voice…his preference for textural transition over thematic development given an effectively powerful account.”

He currently composes and performs with CPOP (Contemporary Portland Orchestra Project), which he founded in the belief that artistic relevance and sustainability must entail a stringent commitment to

Oregon Connection: I grew up in Portland, Oregon premiering and conducting my first work with the Metropolitan Youth Symphony. Since then I have had the honor to collaborate with many artists and ensembles including Third Angle Ensemble, Opera Theater Oregon, Filmusik and more.

My experience in the Northwest shaped my belief in the transformative and communal power of music to bring ideas and communities together; whether human communities or between humans and the natural world.

Posted by Soundscape Explorations at 11:52 AM