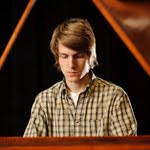 Peter Kramer was born in Portland, Oregon where he studied composition, piano and violin with Dr. Marshall Tuttle at Mount Hood Community College. He is currently an undergraduate student at the Oberlin Conservatory where he is pursuing two majors, one in composition with Dr. Lewis Nielson, and the other in harpsichord performance with Webb William Wiggins. His interests include harpsichord building and maintenance, playing the lute and baroque guitar, and studying aspects of American folk and blues music. Year round Peter works in Oberlin’s piano/keyboard workshop where he has recently helped restore an 1810 Broadwood forte piano and where he maintains and repairs harpsichords on the Oberlin campus. He has recently co-created the Ensemble Kritik with fellow Oberlin students Carrie Frey (viola) and Eastman Presser (electronics/percussion) on the Oberlin campus, with future plans of performance in and outside of the conservatory.

Representative Works:
Wedge for three flutes, What Though That Light for piano, two violins and soprano, Tastar de Corde "testing the strings" for four amplified harpsichords and fixed media

Oregon Connection: Early in my life studying classical music was never an interest for me. I grew up playing guitar, learning the blues and playing in bands around the Portland area. At the age of 18 I began to study composition, keyboard and the violin. After 3 years of community college I transferred to Oberlin Conservatory where I found an interest in early music and began to study the harpsichord as well as composition. While in Community College I took advantage of attending concerts at the North West Music Festival at Kaul Auditorium and hearing the orchestra play at the Schnitzer. When home from school I have enjoyed playing solo guitar in bars and other venues around the Sellwood area and at local farmers markets. I have also performed as a harpsichordist with local baroque musicians from the Portland Baroque Orchestra, and have a close relationship to the harpsichord teacher Bonnie Garret at Reed College.

Posted by Soundscape Explorations at 2:31 PM