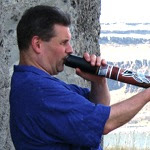 In his teen years, he toured the U.S. with the Argonauts Drum and Bugle Corps. “A self-identified music nerd in high school, he enjoyed singing in school choirs and playing tuba and euphonium in the wind ensemble and other groups, graduating with the John Phillip Souza award”.

In 1988 he entered the University of Oregon in Eugene majoring in music performance and composition. He studied tuba and bass trombone and participated in the Green Garter Band, wind ensemble, and other groups. He taught himself to play the didgeridoo, became very accomplished, and produced several CD's of his work. He graduated from the University of Oregon in 1995.
Upon graduating from college, he worked for City Lights and Pacific Winds music stores, and taught private lessons in the Eugene area. He performed with numerous groups including the Starlighters, Jazz Kings, Brass Band. He played the bass trombone with the Newport Symphony Orchestra from July 2012 until his death.

Representative Works: "Earthshine" for Handbells and Didjeridu (2011), "The Happy Singing Pipe" (excerpt) for solo didjeridu (2011). Earthshine (Earthlight II) for Didjeridu and Handbells (2012). CD Dronedance composed and performed by Todd Johnson on solo didjeridu: Groove Peace, Voice of the Earth, Rockin That Yirdaki, I didnt know that thing could swing, Voice of the earth II, In Didj in Us, Sacred Meditation

Collaborative Works: Transformer, (2013) an original work for didjeridu and organ by John Ranney composed in collaboration with Todd Johnson. Concerto for Didjeridu (2009) by Sean Wagoner and When One World Ends (2011) by Brandon Scott Rumsey.

Oregon Connection: Todd was a native Oregonian. He enjoyed teaching about the didjeridu, an Australian aborigine instrument, and often gave performances around the state. Many know him through the classes he taught at the annual summer Bell Camp on the Oregon Coast. As a Methodist, he was very active in "making a joyful noise" on the trombone, didgeridoo, and handbells in church related events.
Sources: Pamlin Media and various Internet sites. Compiled by OCW

Posted by Soundscape Explorations at 12:42 PM