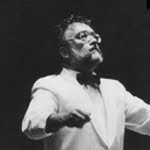 "I am NOT a minimalist, as some critics and reviewers have indicated!" sputters Tomas Svoboda. His sound, often confused with the minimalists who engendered and drove a generation of jungle-beat ostinato in the dance-pop world, differs from theirs in that Svoboda propels ostinato in short phases with abrupt changes and a sense of drama -- the exploding raucous rock-and-roll exuberance in Storm Session or metal-madness in the last movement of his Suite, whose first movement resembles more-orthodox phase-change minimalism . . . if orthodox minimalists were not such somnambulists.

Some accolades: nominated for a Grammy award for his Concerto for Marimba and Orchestra in 2003, American Record Guide's Critics' Choice award winner for his Piano Trios in 2001, recipient of Oregon's Governor's Arts Award AND Oregon Music Teachers Composer of the Year (both in 1992). Born in Paris in 1939, educated at the Prague Conservatory and the Academy of Music, he earned his master's degree at the University of Southern California, where he studied composition with Ingolf Dahl and Halsey Stevens. In 1971 he joined the music faculty at Portland State University, where he taught until he retired in 1998.

Oregon Connection: In 1969 Tomas Svoboda accepted a position at Portland State University in Oregon where he taught composition and music theory for 27 years, retiring from full time teaching duties in June 1998. He continues to live in Portland and considers himself an enthusiastic hiking and mushroom hunting and weather watching Oregonian!

His collaborations with Oregonians have won accolades such as his Marimba Concerto; In December 2003 it was named in a Grammy Award nomination in the category of "Best Instrumental Soloist With Orchestra"; Niel DePonte, marimba; James DePreist, cond.; Oregon Symphony; [Albany Records].

Posted by Soundscape Explorations at 11:27 AM